Aigai – where nowadays Vergina is located – was the capital of the Kingdom of Macedonia, before King Archealos to decide and transfer it in Pella. There is archaeological evidence proving that the site was continuously inhabited from the Early Bronze Age (3rd millennium BC) while in the Early Iron Age (11th-8th centuries BC) it became an important center, rich and densely inhabited. The city reached its highest point of prosperity in the Archaic (7th-6th centuries BC) and Classical periods (5th-4th centuries), when it was the most important urban center of the area, the seat of the Macedonian kings and the place where all the traditional sanctuaries were established, the royal tombs were gathered in its extensive necropolis and the imposing Palace of Aigai was constructed. 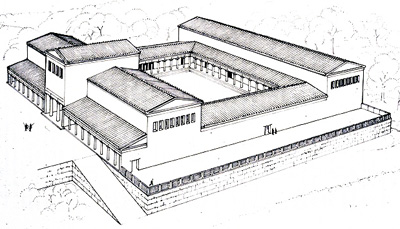 The Palace was constructed by Philip II, the father of Alexander the Great, between 350-340 BC and it is estimated that its construction lasted 10-12 years. The Palace, which had 78m length and 14m height and spread over a total area of 50.ooo sq.m., was particularly famous for its yard of a total capacity of 2.ooo seating people and its impressive mosaics that occupied 2.000 sq.m. One of them is still surviving in a very good condition and is made of tiny white, black, gray, yellow and red pebbles. The theatre on the north side, from the second half of the 4th century BC, forms an integral part of the palace complex. Just above there is a sanctuary of the goddess Eukleia, with small 4th and 3rd centuries BC temples containing statue bases inscribed with the names of members of the Macedonian royal family. After the conquer of the Macedonian Kingdom by the Romans in 168 BC, the city of Aigai and the unique Palace were demolished. Α huge effort for the partial restoration of the Palace has started and continues until today in order to bring back to life the house of Alexander the Great. 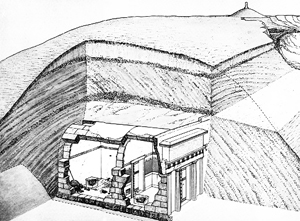 The best known feature of the Archaeological Site of Aigai in Vergina is the necropolis, which extends for over 3km, and consists of three main parts. First, the Cemetery of the Tumuli at the heart of the necropolis contains over 300 grave-mounds, some as early as the 11th century BC. To the north-west of the ancient city there is an important group of royal tombs from the 6th and 5th centuries BC belonging to members of the Macedonian dynasty. One of them, from around 340 BC with an imposing marble throne, is believed to be that of Euridike, mother of Philip II. Last but not least, the Great Tumulus and the Archaeological Museum of Vergina are with no doubt the most impressive monuments of the site. In 1977, the excavations of M. Andronikos revealed the royal tombs of the Great Tumulus, most important among which was that of Philip II (359-336 BC) father of Alexander the Great. For the protection of the royal tombs an underground building was built in 1993 in order to maintain stable temperature and humidity, which is necessary for the preservation of the monuments. This building had the external form of a mound, while the interior since November 1997 was transformed into a museum and the treasures found in the royal tombs were exposed to the public.

Seli and 3-5 Pigadia (or Tria Pente Pigadia) are two ski centers, located 95km and 108km away from Thessaloniki, respectively. Both ski centers are fully equipped with plenty of lifts and ski slopes, whereas 3-5 Pigadia has a complete artificial snow system to ensure the functional operation of the center throughout the whole winter. 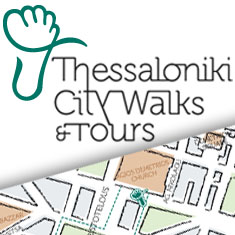