The Arch of Galerius, better known as the Kamara, is located at the junction of Egnatia and Demetriou Gounari street further up Navarinou Square. The quadruple arch was part of the large building complex which included the Galerius Palace, the Hippodrome and the Rotunda. It was built at the end of the 3rd century or early 4th to honour the victories of the Emperor Galerius against the Persians in Asia Minor and Syria (297 AD). 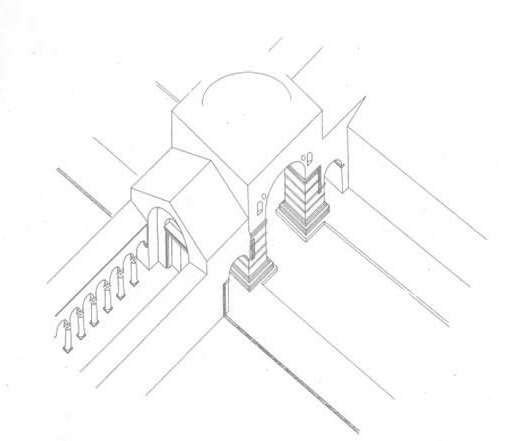 As you can see on the design on the left, four central columns supported a dome and thus created arches. Four gates were formed with two gates on today’s Egnatia street and the other two on today’s Demetriou Gounari street, the road that ran from the Galerius Palace up to the Rotunda. Only two of the four columns remain of this impressive stucture, the reliefs on which represent the Galerius’ victories against the Persians and the triumphal celebrations. Among others you can see scenes of war, mounted battles and victories, triumphs, ceremonies and sacrificies in four bands, separated by relief flowers and branches. Diokletianus, Maximinus and Constantius, the other three of the Roman Tetrach, can be also observed on the relief joined by gods and forms of the Roman tradition.

The Arch of Galerius Photogallery