The Rotunda, built in the early 4th century, is an ancient impressive roman monument inscribed in the World Heritage List of Unesco. It was probably first constructed as a mausoleum for the Emperor Galerius, who had his seat at Thessaloniki at the end of the 3rd century and the beginning of the 4th. It was part of the impressive building complex which included the Galerius Palace (Navarinou Square), the Hippodrome, the Arch of Galerius (Kamara) and other buildings in Thessaloniki. 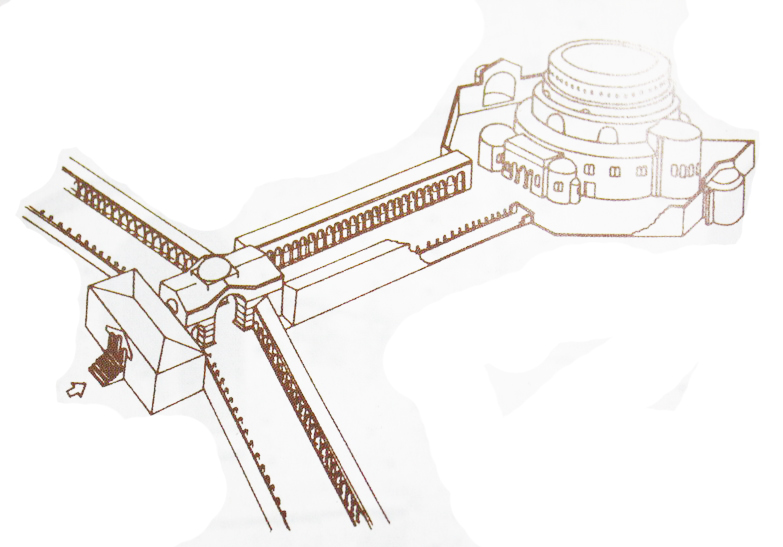 As you can see on the design on the left, there was an impressive street lined with massive collonades that joined the Arch of Galerius and the rest of the Galerius Palace with Rotunda. The cylindrical building initialy had an internal diameter of 24.5m and 30m height, while the walls are 6.3m thick and inside have eight apses (recesses). In the end of the 4th century, the Emperor Theodosius the Great (379-395), was baptised as Christian in Thessaloniki and converted the mausoleum into a Christian church. As a result, the sanctum and perimetric aisle were added and the western gate opened to become the principal entrance instead of the southern.

The Christians decorated the walls of Rotunda with a mosaic of unbelievable variety of colors, while the figure of Christ was depicted in the center of the cupola in a shining sphere, in the colors of the rainbow. Unfortunately, only little can be seen nowadays of this composition. However, below the cupola, bands of angels, martyrs and the saints of early Christian times are depicted and preserved in a significantly better condition. The church was dedicated to Christ or the Archangels and during the 10th-12th centuries was the cathedral of Thessaloniki.

During the Turkish occupation, it was turned into a mosque and the minaret, which stands in front of it, was built (1591). After the liberation of the city (1912), the building was re-tranformed into a Cristian church under the name of Saint George (Agios Georios). Finally, the name Rotunda prevailed due to the cylindrical shape of the monument.