The White Tower is a fortification, cylindrical tower of 33,9m height, 70m perimeter and 22,7m diameter. It has 6 floors with an internal staircase, which twists and screw in contact with the outside wall. Thus, every floor has a central circular hall with a diameter of 8,5m, which communicate with the smaller quadrangular rooms, opened in the thickness of the outer wall. The sixth floor has only the main hall and outside it a terrace overlooking the city and offering beautiful views of Thessaloniki. 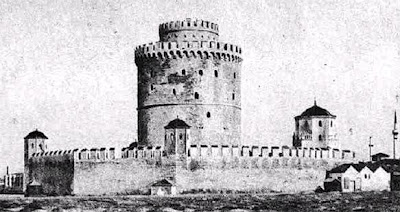 There is an enduring controversy about when the White Tower was built, with three versions to be the predominant. The first one indicates that is was built during the Venetian rule (1423-1430) at the point where the eastern wall me the sea wall. According to the secondversion, the date of construction of the White Tower is placed around 1450-1470, shortly after the city’s occupation by the Turks (1430) and is one of the earliest examples of Ottoman fortification, which takes account of the artillery. The third version indicates that the tower was built by the Turkisn Suleiman the Lawgiver (or Magnificent) in 1535, according to a marble gate inscription. However, there is a chance that the inscription referred to the construction date of the wall precinct and not the tower itself.

At the beginning, it was named “Tower of Lion”, as stated by the Turkish inscription of 1535. After the dissolution of the Order of the Janissaries in 1826, during the Turkish occupation the tower acquired the name Kanli Kule, or “Tower of Blood”, which maintained due to the subsequent use of the tower as a prison and place of torture and executions, which were communicated with a cannonade. Its current name was given when a Jew prisoner, Gkintili Natan, convicted for a love crime, whitewashed the tower in 1891, in exchange for reducing his sentence and therefore his release.

After the liberation of the city of Thessaloniki in 1912 and up until 1983 hosted the city’s air defense. Today, it houses the White Tower Museum, a Thessaloniki history museum.