Agia Sophia is one of Thessaloniki's and Christianity's monuments and was for a number of centuries the city cathedral. It stands in the square of the same name, a basilica with cupola, tending towards the cruciform with dome. On the east side there are three apses (recesses), while on the west side, there is evidence of a covered gallery. The original church was probably built in the 4th century and dedicated to the Wisdom of God, immediately after the triumph and establishment of Christianity by the Decree of Mediolanon (313) and the 1st Ecumenical Synod (325). In its present form, the church is probably a building from the times of Justinian (6th century) or a little later (7th-8th century). Fires and earthquakes have damaged it. During Turkish rule, it was turned into a mosque.

The church of Agios Dimitrios, the patron saint of Thessaloniki, was first built in the early 4th century (306) as a small house over the vault of the Roman baths in which the Saint was martyred. A century later the sub-prefect Leontius, cured of a serious illness by the grace of the Saint as he believed, built in the place of the house the magnificent basilica, which at that time dominated over the whole city. In the 7th century, this monument of early Christianity was destroyed by fire, not aided by the fact that its roof was of wood. It was immediately rebuilt, more or less in its original form, but was once more burnt in the fire of 1917. After the destruction of 1917, the Macedonian architect, A. Zachos, started the reconstruction of the church, preserving what was left after the fire. He gave all the new sections of the building their original form. Even the roof, now concrete, was built like the old wooden roof.

The Vlatadon Monastery in the Ano Poli (Upper Town) is the only one left of the many that existed in Byzantine Thessaloniki and in the area surrounding it, in the foothills and on the slopes of Mount Hortiatis. It was founded in the middle of the 14th century by the Vlataioi brother monks, possibly with the support of Anna Palaiologue, who was in Thessaloniki at that time. The panorama from the monastery looks out over the city, reaching in the far distance the peaks of Mount Olympus. Out of the old buildings of the monastery, only the chancery (14th century) remains, called the church of the Transfiguration of the Saviour even though the monastery was actually dedicated to the Almighty. The church was built on the site of an older building, the frescoes and other elements dating from the 11th century.

Agia Aikaterini (13th century), characteristic of the architecture of the Macedonian School, is a cruciform church with a central dome and four smaller domes at the corners. It is an exceptionally elegant building with many interesting features. The church lies high up close to the Western walls of the Ano Poli (Upper Town) and has managed to preserve its external appearance in almost its original form with the domes supported over skilfully decorated arches. It is built of bricks and the work on the walls is wonderful. The skilful architecture of the brickwork, the marble pieces that have been incorporated (probably taken from an older building) and the enamelled plates etc., give the walls the impression of embroidery. During the rule of the Turks, the church of Agia Aikaterini was one of many churches to be turned into mosques.

Beautiful cruciform church with five cupolas and gallery which was built as the chancery of the monastery of the Virgin Mary at the beginning of the 14th century, the period when Thessaloniki was flourishing culturally. The length of the church is 19.2m and the width 17.5m. The height of the middle cupola is 16m. On the exterior and particularly the eastern wall, the bricks and limestone blocks are beautifully combined to create patterns of crosses, diamonds, meanders etc. Despite the damage caused by the Turks, who took off all the gold pieces, the mosaics (1314) in Agioi Apostoloi are superb, perfect examples of the Byzantine Art. The wonderful frescoes, which covered almost all the interior of the church, also suffered severe damage at the hands of the Turks, when they were coated and the building was turned into a mosque in 1430. Those in the chapel of Prodromou remain in good condition.

It is a small wooden-roofed basilica dating from the early 14th century. It was a chancery, that is the church of the monastery. It probably owes its name to the orphanage that was run by the monastery. Today the church is a museum. The frescoes of this humble church are masterpieces of the art of the so-called Palaiologue era and are preserved in excellent condition. They also date from the 14th century and are works of the great Thessalonian painters of the time, most probably of Kalliergis. The picture of the Canaanite wedding is magnificent.

This humble church was built in the 5th century and it is of great architectural significance as the precursor of the domed cruciform, with brilliant interior decoration, mosaics and frescoes. It was the chancery church of the Monastery of the Saviour Christ, built by a stone quarry by Theodora, the daughter of the Emperor Maximian. The original square building (12mx12m) underwent a number of interventions due to a damage caused by repeated disasters and by the Turks when they turned it into a mosque. The treasure of wonderful mosaics (5th, 12th and 14th century) were revealed in 1921 when the church was resanctified as a Christian place of worship and the coatings with which the Turks had covered any Christian decoration they had not destroyed were removed.

Agios Panteleimon is a 14th century masterpiece of Byzantine art of the Macedonian School. Only roughly restored, for years it has been waiting for the restoration of the damage done by Turks, when they turned it into a mosque, and the earthquakes. Its two domes are most impressive, the central one supported on wonderful arches and the smaller, beautifully decorated one over the narthex. Inside very few of the frescoes, also dating from the 14th century, have been saved.

The Panagia Chalkeon is one of Thessaloniki's jewels. It was built in 1208 on the site of an ancient temple of Hephaestus in the Coppersmith's Arcade in the Ancient Agora of Thessaloniki, close to Egnatia street. Then, as now, this was the area where the coppersmiths had their workshops and hence the name. It is charming, small, brick, domed cruciform Byzantine church with skilful decorative elements. The tomb of the church's founder lies inside: "Christoforos the most glorious royal premier swordsman...". Only a few of the frescoes (11th and 14th century) inside the church have been preserved, since this church too was turned into a mosque under the Turks. The fresco in the cupola depicts the Ascension of Christ with prophets and angels.

Close to Arch of Galerius (Kamara), at the junction of P.P. Germanou and Egnatia streets. The church is literally suffocated by the neighbouring blocks of flats and yet it is most impressive as a charming little Byzantine church with an extremely high and neat cupola. The Metamorphosis Sotiros was built in the 14th century. In its original form, the church was a square with dome. The narthex to the west was added later.

The Church of the Prophet Elias (14th century) is in the Ano Poli (Upper Town), above St. Demetrius and Government House (Dioikitirio), probably on the site of the Byzantine palace of Thessaloniki, which was destroyed in 1342 in the Zealot uprising. It was built around 1360 on the model of the chancery churches of the monasteries of the Mount Athos and has a complicated exterior of apses, little domes and successive arches which rise higher to eventually support the central cupola, rising impressively into the sky. The brickwork of the walling is beautiful, richly decorated.

The great church of the Virgin Mary (Theotokos), as it was first named, was built in the middle of the 5th century (450-460), probably on the site of an ancient temple of the Thermaia Aphrodite, using a lot of the materials from the earlier buildings. The name Acheiropoeitos or "made without hands" was given in the 14th century due to the icon of the Virgin Mary, which was miraculously formed in the church. The church is a triple-naved basilica of 52m length, 31m width and 14m height. In the center of the southern wall, towards Egnatia street, there is an impressive propylaea (entrance) and chapel. To the west, the traces of an external narthex can still be seen. 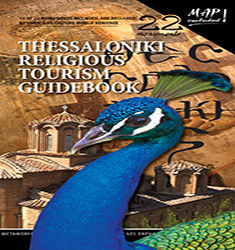